A Cry From Primeval Times

Their skin is so rough that it almost looks like it has scaled. It gives the rhinos an appearance as if they have come to us from prehistoric times. And in fact, rhinos have existed for over 50 million years. They have survived the ice ages, but will they survive humans? Because the biggest threat to rhinos today are the poachers who slaughter them in order to sell their horn at high prices. 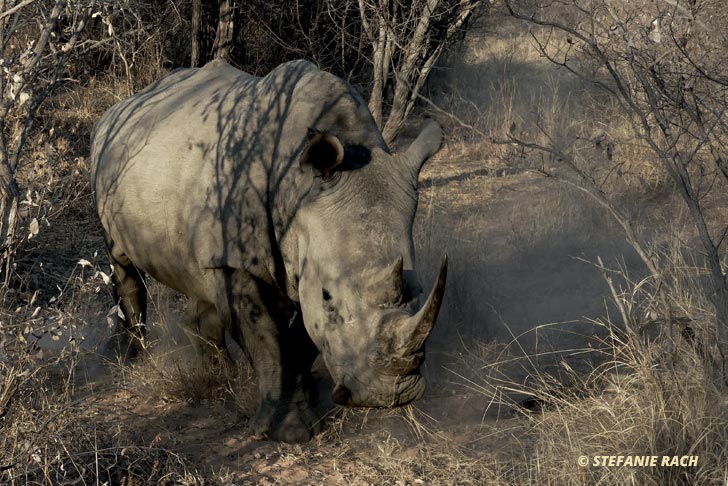 “With every step, my skin tightens a little. Because the mud I have covered my body with has been dried by the sun in the meantime. With every step I notice new smells. It smells of delicious grass, the first blossoms of the bush willows give off a lovely sweet scent, the dust I stir up carries the fragrance of home. With each step I perceive other sounds of my many fellow creatures. A spider-hunting wasp flies by several bushes away. A giraffe plucks the leaves off an acacia tree. And suddenly I hear this deep buzzing! I know that sound! It was buzzing from the sky back then too, coming closer, becoming unbearably loud. It was somewhere above me, chasing me! Until I became dizzy and could no longer stand on my feet. Night fell around me. When I woke up again, I felt dazed. But I immediately sensed that something was wrong with me. Something was missing! My beautiful horns!

I had already fought countless battles against other bulls. They were strong, but I was stronger. I am used to showing lions who is in charge, to scaring crocodiles away when I want to drink from my waterhole. All my life I could rely on my strength. But now that I hear that buzzing, the buzzing that comes closer and closer, I am scared.”

“We approach the bull rhino by helicopter. A magnificent specimen! It hurts to have to take off the horns of this beautiful bull now. But in the end, this is the best way to protect rhinos from poachers. As a vet, I have unfortunately been called out several times when poachers have struck again. They have literally chopped off the rhinos’ faces! Often the poor animals were still alive when I arrived. They were slowly bleeding to death. All I could do for them was to give them the last injection. I am angry and I am sad. I see that the bull is trying to escape from the helicopter. He’s scared. I am sorry for what I am about to do to you. But rather lose your horn than your life.”