Scientists are still unraveling the COVID-19 origins story; initial analysis submitted that a bat was the likely reservoir host, and, while a pangolin has not been ruled out as the vector inducing “spillover”, the intermediate host or hosts remain undetermined in the absence of sufficient probabilistic accuracy. 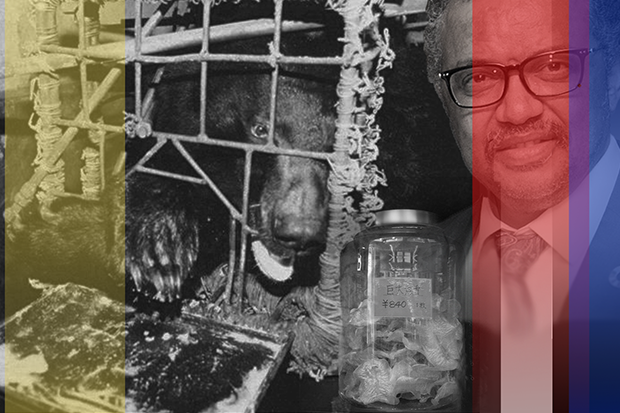 Scientists are still unraveling the COVID-19 origins story; initial analysis submitted that a bat was the likely reservoir host, and, while a pangolin has not been ruled out as the vector inducing “spillover”, the intermediate host or hosts remain undetermined in the absence of sufficient probabilistic accuracy. Whether the virus emerged at the Wuhan live animal market from an interaction between an animal and a human or whether it emerged elsewhere, the likelihood of aberrant anthropogenic disruptions to a once intact human-wildlife interface triggering the evolution of COVID-19 cannot be dismissed.

Life has changed dramatically for global citizens since the onset of COVID-19 in China in December 2019. Given the staggering number of infected humans and the mounting death toll, any wildlife market continuing to operate anywhere in the world is tantamount to a ticking time bomb. The poaching, trafficking, and farming of wild creatures and the use of wild animal body parts in commercial enterprises, whether legal or illegal must be banned. Cultural traditions that continue to exploit wild animals must move to revise such practices, legally enforcing non-endangered plant-based technologies as alternatives.

Traditional Chinese Medicine (#TCM), a multibillion-dollar industry, uses the body parts of a staggering array of wild creatures; critically endangered, pathogen-heavy, and otherwise. Rhino, leopard, pangolin, bat, tiger, lion, sea horse, macaque, porcupine and even elephant and donkey make up a segment of a much longer list of “ingredients” purposed by #TCM.

Worryingly, the World Health Organization (#WHO) has included #TCM in its International Classification of Diseases, “a highly influential document that categorizes and assigns codes to medical conditions, and is used internationally to decide how doctors diagnose conditions and whether insurance companies will pay to treat them”.

China must end the use of animal body parts in #TCM, the #WHO must remove #TCM from its ICD and China’s Belt and Road Initiative (#BRI) must be constrained. Nations importing #TCM, or manufacturing #TCM within their borders must regulate it, ensuring no animal body parts are used as ingredients.

GMFER is developing a strategy and generating content to underwrite the launching of a campaign that regulates #TCM. As of this writing much of our strategy must remain undisclosed given the dynamic nature of the governing variables.